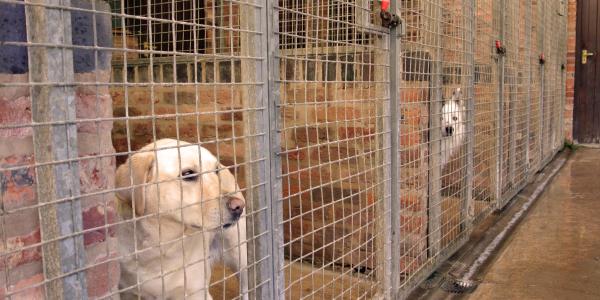 We like the pets to be with us for a few days before the shipment. This gives them an opportunity to use their travelling kennels as beds to get used to them and they usually travel extremely well. We will gladly board your pet for any length of time, and boarding up to 3 days prior to export is free of charge. Our kennels and cattery are situated in ideal surroundings, surrounded by countryside and next to a lake. All have underfloor heating and outside runs.

A few people do not like the idea of their pet coming here for three days before they fly, others think it is fantastic. It not only gives us a little time to get to know your pet, but also time for the right size travelling kennel to be made. If your pet is a little arthritic, then an extra inch or two will be added. Once made, your pet will then become familiar with the kennel.

A few years ago, we had two Staffies who came in a few days before heading off to New Zealand. For the sake of argument, we will call them Jack and Jill. Both dogs were rescue dogs, Jack was big, full of fun, but pretty aggressive towards other dogs and guarded his kennel extremely well. Jill was a real lady, a little sweetie and kept herself to herself. When the kennels had been made, we popped Jack into his, in the kennel kitchen and adjourned for coffee. 15 minutes later, we went back into the kennel kitchen and Jack had completely trashed his water bowls - broken beyond repair - not good. Jack and his repaired kennel were then placed in the office and he went in and out for the next couple of days until his temper abated. He arrived in Christchurch well and with the water bowls intact. Had we met his owner at Heathrow and put him straight into his kennel for the flight, we do not think the outcome would have been such a happy one - this is just one example of why we operate in the way we do. Our interest lies with your pet.