On 12th December 2013 we received an email request from a lady called Elena who was living in Montenegro.

"Could we ship her dog Ralf to New Zealand, please?"

This was the beginning of a quite remarkable story of love, grit and determination, not to mention getting to grips with Google Translate!

The story really begins in a town called Novosibirsk which, being in Siberia, is four hours by plane east of Moscow! Elena and her family (husband, son and Ralf) lived there until it was decided that their son could benefit from continuing his education somewhere else, say New Zealand. He found that New Zealand was very much to his liking and stayed! Elena's husband then followed their son, leaving Elena and Ralf to follow on when they could. The possibility of flying Ralf to New Zealand from Russia was a complete non-starter as Russia is not deemed to be an 'approved' country as far as the Kiwis are concerned, so Elena started her research and took herself and Ralf off to live in Montenegro which is a 'friendly' country. She and Ralf lived there for just over five months waiting out the Rabies vaccination rule.

At the beginning of March 2014, Elena was then joined by her friend Svetlana and together with Ralf, they made their way from Budva to Bar (Montenegro), by boat to Bari in Italy, from Bari to Padova and then Paris by train. Ferry from Calais to Folkestone then train to London, across London to Euston Station and then to Shrewsbury where we plucked two very weary girls and a large exuberant black Labrador off the train and brought them home! 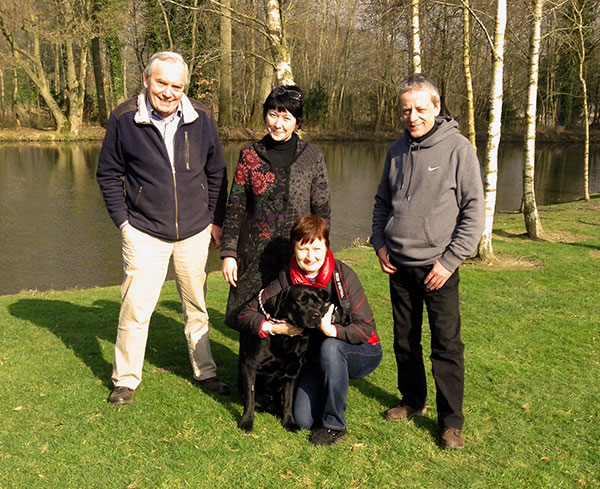 Ralf stayed with us for three weeks and we did all the final blood tests from here. Not counting the final flight down to Auckland on 3rd April, Ralf had travelled 5500 miles from Novosibirsk to Lydbury North and is now safely residing in Auckland where he is apparently sleeping on his back on a bed and snoring loudly!

Elena and Svetlana spoke very little English! They negotiated the trains, boats and planes with big smiles, a pack of cards and hundreds of travel tickets in their bags. The day after they left us, they flew out of Gatwick and back to Moscow - mission accomplished!

Elena finally arrived in Auckland on October 19th 2014, having had her visa turned down twice (remember Ukraine?). She is a Civil Engineer by trade, as is her husband. Neither spoke very good English, but they are working on it! I finally caught up with the family in November 2014 on my first, but certainly not last, visit to New Zealand. Elena, Dimitri, Sergie and Ralf are happily reunited and as we sat down to a delicious Russian lunch and a bottle of red wine we all became a little emotional when raising our glasses to an incredible family with an incredible story to tell.