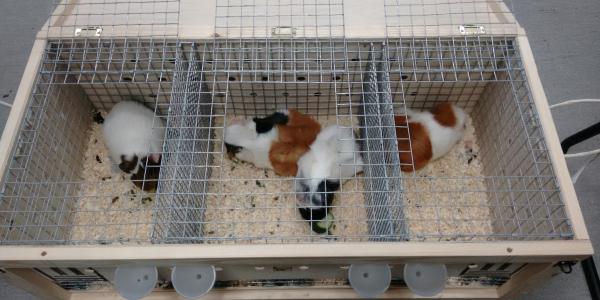 As promised Fiss, some pics are attached! So as you know last night we collected The Famous Four as they are now known, and we are so happy to have them back! There were no problems apart from a bit of a delay - the flight landed at 8pm and there was a bit of confusion as to where the paperwork was at customs - they tried to send us to cargo when we knew from speaking with BA that we needed the airway bill stamping at customs first! Luckily it seemed that the paperwork was just delayed slightly so once that arrived and we paid a process fee and got the stamp we got back on the train one stop and walked to the cargo building (actually they rang us whilst at customs just after we had the paperwork - Adam asked if the piggies were ok to which the man replied 'oh well they're moving!' - we just wanted to see them by this point!) At the cargo office the carrier was on the desk and there they were! They were all having a nosy and grazing - it was the best thing to leave them food in the carrier (which was brilliant by the way and travelled really well including the water - they still had some left) :)

After paying another fee (!) and getting everything signed off we ordered a taxi and whilst we waited cut open the plastic tags so we could get to the piggies! They started squeaking when they heard us talking and seemed absolutely fine - as you know we were worried about Barry but all of them seemed calm and warm and dry (their paws were a little cold but they were fine!) and just curious! We gave them a chuckle and brought some cucumber with us to feed them which they demolished! Then it was into the taxi for the final leg and to the apartment where everything was set up. We could finally give them a proper cuddle which was amazing after so many weeks, then we let them settle into their new houses where they were eating lots of hay and squeaking! A little while later they were all fast asleep and this morning they were very noisy and active - haha we think they might be jet lagged!!!!

It's amazing to think they have travelled all that way and we too were holding our breaths, we've been on edge really until we knew they were here safe.

Barry, Brian, Margaret and Dorothy have some thank you's to send after Christmas but we'll give them a rest first, so in the meantime all that's left to say is a massive thank you for being so conscientious about everything from start to finish and ensuring they were delivered safely to us and in such a well built carrier. In fact, cargo said it was 5* compared to what they see!!! We were so pleased and so were the piggies, who seem happy to be back with us.

We are now looking forward to a lovely Christmas all together!!!

Wishing you all a wonderful festive time,